The Eve of the First World War, Letter from Erich Gutkind

In late July 1914, Dimitrije Mitrinović (like so many others) could no longer ignore what was happening in Europe. He knew that when war broke out, he was at risk of being drafted into an army whose government he had always struggled against – that of the Austro-Hungarian Empire. Alternatively, and more likely given the fate of so many Serbs who were treated as enemy aliens in their own country, he would have been imprisoned. His well-known beliefs and political activities put him in an especially vulnerable position, particularly whilst he was carrying a Serbian passport. He risked being arrested as a spy.

Faced with these grim prospects, Mitrinović thought of escape, but wrote first to his friend and mentor Erich Gutkind, apparently seeking advice and looking for reassurance that his flight wouldn’t be seen as a betrayal of the Blutbund movement that the two men were working so hard to create. Mitrinović’s letter to Gutkind sadly does not seem to survive, but we do have what now seems like an astonishing reply.

Writing on 30th of July (the day before Germany declared war on Russia), Gutkind urged Mitrinović not to be hasty and act, but to wait for a “metaphysical electrical flash of lightning”, which would initiate the change in the world they wished to see. He wrote that it was quite possible that it might all come to nothing, simply settling down again. He warned Mitrinović not to involve the “plebs”, as he believed action for a better world had to come top down, starting from the elite group of artists, writers and intellectuals who made up the Blutbund brotherhood. Gutkind finished by instructing Mitrinović to maintain the most “severe Buddhist calm” in the face of current events. Personally, I am reminded of Mrs. Jellyby in Dickens’ Bleak House, whose great preoccupation with her charitable work in Africa blinds her to plight of those in her own city (and even her own home).

Fortunately, the letter seems not to have dissuaded Mitrinović entirely. He travelled to Berlin, borrowing money from Gutkind’s mother to come to England. Travelling on one of the last boats out of mainland Europe, he later recalled realizing as the English coastline came into view that he would need money to prove to the British authorities that he could support himself. A fellow passenger lent him £5, and he was able to remain in the UK.

Mitrinović remained a lifelong admirer of Gutkind’s work, and the two did stay in contact despite the disintegration of the Blutbund in the face of the First World War. Indeed Mitrinović once claimed in later life that if Gutkind had not written his book Siderische Geburt (Sidereal Birth),  he himself would have to have done so. Gutkind’s central ideas relating to the essential unity of all humanity, the need for change in contemporary society, and what  Mitrinović’s biographer Andrew Rigby has described as ‘…the higher order consciousness that was necessary in order to create the new world that was imminent’ all resonated profoundly with  Mitrinović and were central to his thinking throughout his life.

In 1913 -1914 Dimitrije Mitrinović was studying art history in Munich, then one of the centres of the art world. Inspired by Kandinsky’s work and writing, he formed a friendship with the artist and his partner, Gabriele Münter.

Kandinsky and Mitrinović were both convinced of the need for radical change in the world, and felt that this should be led and achieved by the best minds in Europe, and particularly by artists whom they saw as prophets capable of seeing an alternative order. In order to spread their ideas, they set out to publish a Yearbook with articles on cultural and political subjects, as a follow-up to Der Blaue Reiter Almanach (The Blue Rider Almanac) produced by Kandinsky in 1912.

Kandinsky and Mitrinović made contact with Frederik van Eeden (1860 -1932), a Dutch psychiatrist, writer and founder of an intentional community, Walden, and the German philosopher Erich Gutkind (1877 – 1965). Gutkind and van Eeden shared their belief in change being initiated by the intellectual elite, then spreading to wider society. They called for the creation of a “Blutbund” (Blood Band, or Union), bringing together leading figures to effect change. Mitrinović worked furiously to get both the Blutbund and Yearbook off the ground, rattling off letters to politicians, writers, philosophers, philosophers, writers, social critics, political thinkers and leaders across the arts from across Europe and further afield. Amongst those he approached were H.G. Wells, Walter Schücking, Édouard Schuré, Dr. Rudolf Eucken, Ezra Pound, Ivan Meštrović and Stanisław Przybyszewski. 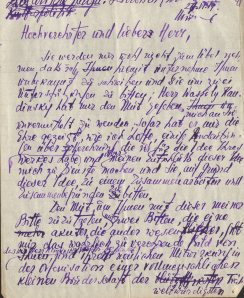 This draft letter to Erich Gutkind is just one of many from this period that survive in the Mitrinović archive here at Bradford. Written in German, Serbo-Croat, French, Russian and English, fortunately some were also later translated by Mitrinović’s circle. To me, Mitrinović’s large, rapid scrawl seems to embody his enthusiasm, conviction and the tremendous energy that he put into the Blutbund and Yearbook project. Although Mitrinović himself was not well known, the fact that he was willing to contact such distinguished men, pitching his vision for the future of Europe and humanity, shows great confidence and perhaps also that sense of great importance and urgency that he attached to his work. This particular letter has a rather nice postscript in which Mitrinović apologies for his imperfect German, but hopes that Gutkind will appreciate what we might call any ‘happy accidents’ that might have crept in. 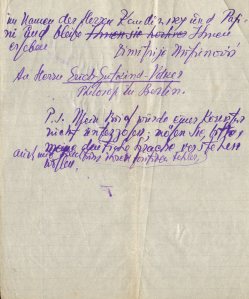 Sadly for Mitrinović, the First World War put paid to the Blutbund. Nationalist feelings ran high, with the group splitting along broadly German/ non-German lines. A group founded on the idea of creating a fairer, more peaceful world was undone by war. The Yearbook was never produced, despite Mitrinović seeking out contributors again in 1916.

Part of what I find fascinating about Dimitrije Mitrinović is his complete refusal to let any setback crush his optimism. Within days of arriving in England as a penniless refugee, he was writing one of his Blutbund letters, urging Peter Kropotkin, the prominent anarchist to support the movement. After the First World War, and doubtless in light of the collapse of the Blutbund, Mitrinović changed tack. Instead of the new world order starting with an elite working to influence the world around them, he would start with more ordinary people who were willing to develop themselves on intellectual and emotional levels. Many in the group he gathered around himself from the 1920s onwards were deeply influenced by his ideas and some would remain devoted to him for the rest of their lives.